Behind the Scenes at The Coronation 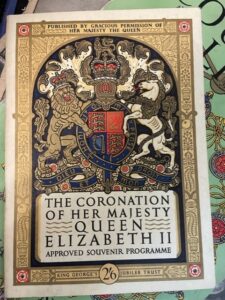 The Queen’s Platinum Jubilee celebrations are fast approaching, so we decided to dig out some archive treasures to see what we could discover about the coronation. And didn’t we do well! Several souvenir programmes, plus lots of supplements and special editions detailing everything you already knew about the big day, but also a lot of things you probably didn’t.

It’s not just about the crown

Coronation supplements contained mostly adverts promoting everything from Maltesers to Daimlers, but there was a lot of very informative content too. Details of the ancient and complicated ritual were described, the symbolism, purpose and necessity outlined. Did you know for instance ‘The Sovereign is baptised, confirmed, married, ordained and symbolically prepared for death, as well as being confessed and administered the Eucharist.’ No wonder it took three hours!

In the lead up to the big day, newspapers such as The Daily Sketch were keen to make sure the public were well informed about how the day would pan out. They included advice on how to get there, how to enjoy the day without fainting and what to wear – ‘take raincoats’! The weather was forecast to be ‘mainly cloudy’ but it did in fact rain for most of the day.

People camped out for days to get the best seats, however, anyone wishing to gain any sort of height advantage were thwarted. Police were ordered to seize chairs, stools, boxes or other articles ‘capable of being used as possible stands’ to ensure a fair view for everyone. A sea of periscopes were used in Trafalgar Square to get even the slightest glimpse of The Queen as she passed. The festivities lasted the whole day with ‘bands broadcasting dance music to the very end’. 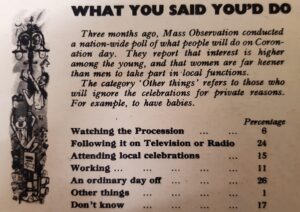 An estimated one million people descended on the capital to see the ‘best run show in the world’ and some took it as a day to cash in by selling flags while others went to work.

A nation-wide poll revealed that interest for the Coronation Day was highest amongst the young. Women were far keener than men to take part in local functions, others were busy ringing bells or watching cricket.

For those not able to make it to London, there was a chance of watching the spectacle on television, if you knew someone who had one. One newspaper included ‘hints for feeding your television guests’ and others created who’s who guides to coronation attendees explaining their role in proceedings. Incidentally, those who did watch the ceremony on TV had a lot better view than the 7,500 dignitaries in Westminster Abbey, most saw very little of the actual service. 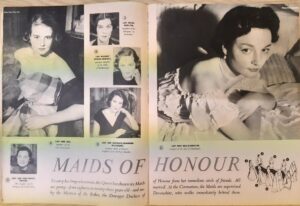 Much like tabloids today, people and what they were wearing was a focus. The Queen’s dress was top secret and the 3 seamstresses responsible (one of whom was Evelyn Stanford, 17 of Twickenham) were sworn to secrecy and asked to remain loyal and not accept bribes.

The main players on the day became a huge source of fascination. Things you might not know about Geoffrey Fisher, the 99th Archbishop of Canterbury are that he did The Times crossword everyday in ‘just under half-an-hour and used to smoke a pipe but doesn’t anymore.’  News around the Maids of Honour was very popular too. There were six in total including Lady Anne Coke, better known these days as the best selling author Lady Glenconnor. 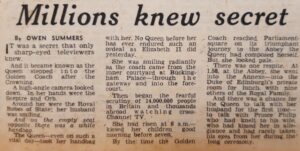 The Queen is never seen without a handbag and Coronation Day was no different. It was white and placed on an empty chair!

Finally, did you know there was another Queen there that day? Queen Salote of Tonga arrived at Southampton 18 May 1953. Her Coronation day some 35 years previous was a very different affair ‘on an island fringed with palms, washed by the blue Pacific.’ with not a rain cloud in sight.

The supplements and special editions are all available to view at Richmond Information and Reference Library, Old Town Hall, Richmond from today.

« Librarians Best of 2021
Celebrating Pride month: The LGBTQ+ books that inspired us »