September in Richmond is Know Your Place month, where we celebrate the rich history of our Borough through talks, workshops, quizzes – and blog pieces. This year, we’re very lucky to have guest blogs from Di Murrell, a local author. We’ll have pieces from Di throughout September, but for today, here’s Di in her own words:

I have spent all of my adult life working, living, and travelling on inland waterways. Once, long ago, we carried lime pulp in canal boats for Roses Lime Juice, coal for the Cadbury’s Chocolate factory and later grain, loaded at Tilbury Docks on the River Thames, bound for Coxes flour mill on the River Wey. Our two boys were born on the boats and were largely home-educated. We travelled to wherever the work took us. Then in the late ‘70s settled in an old toll house beside the Grand Union Canal, and along with the freight work, operated two passenger boats and a boatyard; finally fetching upon running three small ships in and around the Thames Estuary, East Coast and North Sea and into the Netherlands engaged, mainly, in the transport of aggregates.

Eventually, in 1997, we sold up all our business interests and sailed off to Europe’s waterways in our motor barge ‘Friesland’ – there to spend some twenty-plus years roaming the canals and rivers of France, Belgium and the Netherlands. It was during this time that my interest in food and cooking resurfaced and I began to write my first blog. Called ‘‘www.foodieafloat.com’‘ it was said by the London Times to be the best one to discover life on the waterways of Europe. It is now discontinued, replaced by www.writteninmykitchen.com. Some three years ago we sold our beautiful barge and now live part of the year in L.B. Richmond and part in our ‘hovel’ in a frog-catchers’ village in Burgundy, France, beside – you guessed it – a small river.

I came to writing a little late in the day but was rather spurred on when I won the highly esteemed Sophie Coe Prize for Food Writing in 2012. This was for a piece entitled ‘Food on the Move’ that was later published in the food history journal Petits Propos Culinaires (PPC 16) edited by Tom Jaine and published by Prospect Books.

I write articles for Francophile and waterway magazines and contribute food-related essays regularly, along with book reviews, to PPC, which appears about three times a year. I have given talks about our boating life at the Museum of London, the London Canals Museum and River Thames Society and regularly to history groups, societies and organisations on food history topics and about my books.

My first book, ‘Barges and Bread’ was published in 2017 by Prospect Books, and was the UK winner of the ‘Culinary History’ category in the 2018 Gourmand World Cookbook Awards. Inspiration for it was prompted by that period in my life when we had worked for Allied Mills carrying imported wheat up the Thames from Tilbury Grain Terminal to one of their flour mills on the River Way. ‘Barges and Bread’ is the story of how London was fed through the ages, the bulk of which was in the form of grain, delivered to the city via the waters of the Thames. It also explains my own connections with this historic trade. Each chapter concludes with one or two bread recipes of the period.

One reviewer wrote: “‘Barges and Bread’ is a compelling account of how London, throughout its 2000-year history, has always been fed by water. The grain which gave its citizens their daily bread, and ale too, was traditionally brought to this great city by barge via the River Thames. Even in more modern times imported grain still arrives in London in ships. Here, Di Murrell recounts in a highly readable and entertaining way, how the Thames with its flash locks and mills was made navigable; how bargemen brought grain to London even during the time of the plague; how the masters of the ‘hoy’ barges established the first Corn Exchange in the City and how the American gold rush caused the great sailing clippers of the time to bring wheat to the capital. All this and more to be found in this truly fascinating little book. Her firsthand knowledge of the Thames and direct involvement with its grain traffic brings a fresh approach from a different vantage point and gives us new insights into a little-known area of London’s story.”

Available from all good bookshops or direct from Prospect Books. 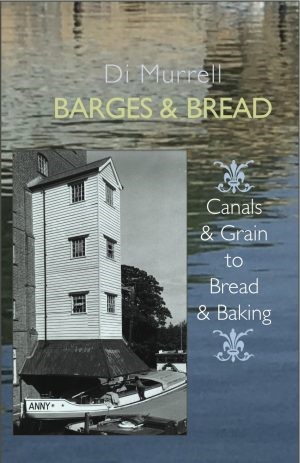 My second book ‘A Foodie Afloat’ was published in 2020 by Matador and it, too, has won a number of recommendations and awards. Short-listed in two categories by the Guild of Food Writers and winner of both the 2021 UK and Best in the World category ‘Food and Tourism’ at the Gourmand World Cookbooks Awards.

‘A Foodie Afloat’ is very different in style and content to ‘Barges and Bread’, but both books do, in their different ways, reflect my twin interests in food and travel on inland waterways. Of ‘A Foodie Afloat’, Sir David Suchet, actor and long-time lover of canals and rivers said:

“The title says it all! Turning the pages, I learned about ‘Ditch Crawlers’ – those who live on and cruise canals and the joys and traumas of boating in Europe. Di and her Captain Tam – “old fashioned fellow that he is” – have spent over twenty years on the waterways of Europe. Centred in Cambrai their barge ‘Friesland’ became a familiar sight. There was always a warm welcome and amazing food. Di Murrell takes the reader on a year’s cruise from Cambrai along the waterways of France. This is no ordinary recipe cook book and you don’t have to live on a barge in Europe to enjoy her wonderful creations!”

A GFW judge said, “‘A Foodie Afloat’ is the story of a cook’s journey through France on a barge. It is a gentle journey by way of the lesser known waterways of the north and centre. And the cook’s main preoccupation? Making sure that tasty food arrives at the table each day and as she voyages across the country showing, through her recipes, how the cuisine changes with the landscape. Bought in the market, dug from a lock-keeper’s garden, even foraged along the towpath beside the waterway, the food she finds and cooks is always seasonal and local to the region. On the other hand, she enjoys good champagne, foie gras and truffles and takes us with her to their source. But this book is about more than just food. A life spent on the waterways of Europe means she is completely at home in her milieu. She talks to lock-keepers, skippers of working barges and those, who, like her, find their sustenance on or near the canal. She records the everyday life of the canal and of those who use it. This eclectic mix of simplicity and sophistication is very appealing and is what makes her book stand out from the crowd. The boating life, though rarely sensational, is full of small events and chance encounters. This is an enticing story of slow boats and slow food. The author makes it come alive, tempting us to give up everything and join her. Is it a travel book, a cook book or what? Who cares I say – it is a very good read.”

‘A Foodie Afloat’ is available to order from any good bookshop or direct from the publisher. 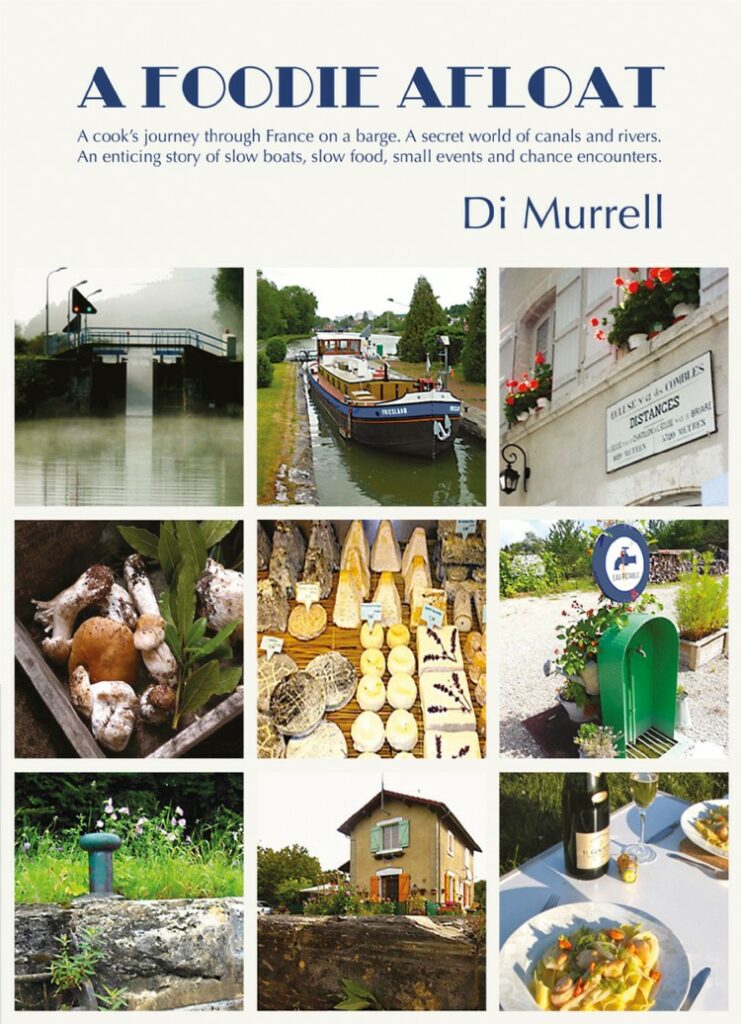 Now I’m working on my third book, ‘Riverfed’: another about the Thames but this time focussing on its culinary history and the many different food associations one has with this river. Hopefully it will be published sometime in 2022. Just follow my blog https://www.writteninmykitchen.com for updates.

The two essays I have contributed to the ‘Know Your Place’ Festival, ‘History on My Doorstep’ and ‘Custard Tarts – Their Chequered Past’, reflect my interest in food centred local history. ‘History on My Doorstep’ was first published in PPC 114 in 2019. ‘Custard Tarts – Their Chequered Past’ is, as yet unpublished, but will be part of a chapter in my new book ‘Riverfed’.

Check back tomorrow for part 1 of Custard Tarts – Their Chequered Past!

« Fire and flood: the saga of Richmond Lending Library
Custard Tarts – Their Chequered Past, part 1 »